Talmud Study
Every Wednesday at noon *Virtual*
Join Rabbi Michael Pincus to explore a bit of Talmud together. Discover questions you never thought to ask and the beauty of rabbinic thinking.
No experience or homework required!

Lay-Led Minyan
Wednesdays at 6:00pm *In Person*
September 7 & 21, October 19
Join us for a lay-led informal evening service with Deborah Savage. It is a chance for us to connect with the holy, to feel connected to something bigger than us, to feel the support of the community. Often people turn to this daily service to honor and remember loved ones who have died, to pray for the health and well being of someone they love, or just as much needed space in their day.

Short Story Coffee Break
First and third Thursdays of the month at 11:00am *Virtual*
Karen Beyard has retired as Learning Center Director, but Coffee Break discussions about Jewish short stories live on! Join a lively group of readers who have met on Zoom since May 2020. We talk about classic and contemporary Jewish stories by American, Israeli, Yiddish, and international writers. Both CBI members and our friends in the community are welcome. For more information or to be added to our mailing list, contact Karen (kbeyard@cbict.org).
September 1: We will read three stories from Jerusalem Beach by Ido Geffen, a popular young and newly translated Israeli writer. Think Etgar Keret’s humor about the challenges of daily life in Israel fused with a strong dose of technology and brain science, Geffen’s field of research.
September 15:  We begin a fall series that focuses on some of the most talked about 20th century Jewish short story writers. First up, Bernard Malamud (1914-1986) whose famous novel The Fixer was widely read in the Jewish community and beyond. Or maybe you saw The Natural with Robert Redford.  Did you know it was based on Malamud’s 1952 novel?  For Coffee Break, we will read three short stories: “Magic Barrel”, “The Mourners”, and “The German Refugee”.
October 6: The second in our fall series of great 20th century writers is Nobel Laureate Saul Bellow (1915-2005). We will read “The Old System” and “Something to Remember Me By”. And just for fun, we will try “The True World”, a fantasy by Jonathan Rosen (Joy Comes in the Morning) that imagines a journalist interviewing Bellow in the afterlife.
October 20:  Amoz Oz (1939-2018), the beloved Israeli writer, is the third of our 20th century greats.  “The King of Norway”, translated for the New Yorker in 2011, returns us to kibbutz life in the 60s. And since Short Story Coffee Break readers have enjoyed Oz before, look for another of his New Yorker stories in November.

Adult Education Learning Series
Join us for our free virtual programs this month!
Registration is requested for all programs, which will take place on Zoom (unless otherwise indicated). Register via the links below or check Chai Lights and Adult Education emails. Once you have registered, you will receive an email with the program’s Zoom link. If you are not receiving adult education emails and wish to be included, please contact Rabbi Rosenbaum at hrosenbaum@cbict.org.
All CBI adult education programs are free of charge. You are encouraged to make a donation to Congregation Beth Israel’s Adult Education Fund to make continued offerings possible.

A century and a half of archaeological exploration in Egypt and Israel has revealed more and more information about the origins of ancient Israel. Key elements include: the word ‘Israel’ inscribed on the Merneptah Stele (c. 1210 B.C.E.);an Egyptian papyrus which refers to nomads from southern Canaan settling in the city of Pithom to escape famine in their land; small settlements in the central hill country of Canaan with a striking lack of pig bones; and much more. Join us as Professor Rendsburg weaves all of this documentation together, along with the relevant Biblical texts, in an effort to reconstruct earliest Israel in the historical and archaeological record.

Gary A. Rendsburg serves as the Blanche and Irving Laurie Chair in Jewish History and holds the rank of Distinguished Professor in the Department of Jewish Studies at Rutgers University, New Jersey, U.S.A. His teaching and research focus on ‘all things ancient Israel’ – primarily language and literature, though also history and archaeology. His secondary interests include ancient Egypt, the Dead Sea Scrolls, and the Hebrew manuscript tradition. Prof. Rendsburg is the author of seven books and about 200 articles. His most recent book is How the Bible Is Written (Hendrickson, 2019), with particular attention to the use of language to create literature. In addition, he has produced two series for the Great Courses program, one on ‘The Book of Genesis’ and one on ‘The Dead Sea Scrolls’.
Click HERE to register 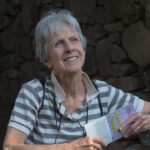 Who were the most important religious figures in ancient Israel? Most people would probably say that the priests were. But they would be wrong. The main arena of religious life for most people in the biblical period was not the Jerusalem temple nor a regional shrine. Rather, it was the family household, and women were major figures in household religious activities. Those activities are largely invisible in the Bible with its focus on the priesthood and sacrifice. However, archaeological materials—and some fascinating ethnographic data—can reveal many aspects of women’s household religious culture and its meaning for the lives of ordinary ancient Israelites.

Carol Meyers, the Mary Grace Wilson Professor Emerita of Religious Studies at Duke University, earned the AB with honors from Wellesley College and the MA and PhD from Brandeis University. She specializes in biblical studies, archaeology, and gender in the biblical world. A prolific scholar, she is the author of more than 450 articles, reports, reference-book entries, and reviews; and she has authored, co-authored, or edited twenty-three books, including Rediscovering Eve: Ancient Israelite Women in Context. She has co-directed several of Duke’s archaeological projects in Galilee and has been a frequent consultant for media productions dealing with the biblical world. She recently served as President of the Society of Biblical Literature, and currently she is a trustee of the Albright Institute of Archaeological Research in Jerusalem, the American Society of Overseas Research, and the Dead Sea Scrolls Foundation.
Click HERE to register

Ways to Help Ukraine
“Responding to the Crisis in Ukraine” – Click HERE for the Union for Reform Judaism’s blog listing steps you can take to support the Ukrainian people, including the Progressive Jewish community.

The Jewish Federation network has promised to raise $20 million to meet immediate and short-term needs, including: Temporary housing for those fleeing violence, Evacuations and assistance for displaced populations, Food, medication and supplies, Purchasing satellite phones to maintain vital communications, Continuing care for homebound seniors, Security for Jewish institutions. 100% of your donation will go to Ukraine relief. Click HERE to donate through the Jewish Federation of Greater Hartford.
Donate to AZM’s Ukraine Emergency Relief Fund. AZM will transmit contributions to emergency relief agencies working in Ukraine, neighboring countries and in Israel.
The American Joint Distribution Committee (JDC) is the leading global Jewish humanitarian organization. Click HERE to see how JDC is responding to the evolving crisis on the ground. Click HERE to donate to JDC’s Emergency Campaign to save Jewish lives in Ukraine.
The Hebrew Immigrant Aid Society’s (HIAS) slogan is “Welcome the Stranger. Protect the Refugee”. Click HERE to learn how HIAS is responding to the crisis in Ukraine. Click HERE to donate to support HIAS’ Ukraine Crisis Response.

Are you talking and praying about Ukraine? Do you wish you had a better feel for the history and culture? Check out “Standing with Ukraine”, an exhibit of books for all ages.
For reliable sources of information about the situation in Ukraine, click HERE.
“Who are Ukraine’s Jews and how is Russia’s invasion affecting them?” by Gabe Friedman, (Forward.com)
“The Origins of the Ukraine Crisis” by David Klion, Jewish Currents
“Ties with Russia Compromise Israel’s Stance on Ukraine” by Bernard Avishai in The New Yorker

The Jewish Community in Ukraine

“16 Jews from Ukraine Who Changed the World” by Abby Seitz (myjewishlearning.com)
“Virtual Tour of Jewish Ukraine”, Baltimore Zionist District
Learn about the Jewish community of Ukraine from the World Jewish Congress (WJC).
Learn about the heritage, history, and sites of the Jewish community of Ukraine from JGuideEurope, the Cultural Guide to Jewish Europe.
The Jewish Virtual Library presents a “Ukraine Virtual Jewish History Tour” by Rachel Rosen and Mitchell Bard.